That is the response of many smokers who were delighted to enjoy a Dominican produced cigar that has so many of the attributes of a high quality Havana. PG cigars have come to be recognized by most cigar connoisseurs to be finest cigar available in the US.

P.G. cigars have earned their international reputation by word of mouth for their balanced medium strength, rich, spicy and deliciously smooth flavors and aromas. Made in Santiago, D.R. with complex aged fillers and binder, and a colorado shade Connecticut wrapper (grown in Ecuador); the favorite of many connoisseurs. The wrapper used on the Gourmet Series is a scarce and richly flavored (medium to dark) reddish brown. P.G. cigars have come to represent the finest in quality, consistency and integrity.

Gourmet Series from the most exceptional years have been set aside to age. Family Reserve and Private Reserve from different years of production are made available to PG Authorized dealers. A very limited number of boxes are available, while vintage packs of PG Family Reserve Rolled in 1996 to 2001 are more readily available. Smooth and and flavorful with a hint of almond and hazelnuts.

The PG II offers a variation of the regular PG while maintaining its Gourmet Series trademark quality of smoothness. A toasty aroma comes from the fact that these cigars were rolled in 1999. Aging in cedar boxes have given these cigars a light aromatic spiciness. With the release of the PG Gourmet Series III, Paul Garmirian celebrates 30 years of producing superb cigars that match the taste of true cigar connoisseurs.  The classic Gourmet Series was released in 1990.  The Series II offered a little more strength; it was slightly nuttier.  The Series III is richer yet, made available by access to darker and oilier wrappers.  Rich, full flavor and with a medium to full body, this addition to the Gourmet Series line is exceptionally balanced with lots of intense flavors and a dark and delicious wrapper.

“With this project, we have made a cigar with the maximum of flavor while maintaining a smooth and subtle taste.  That is why it is the Gourmet Series III.” Kevork Garmirian Medium to full bodied, smooth and simply delicious, the richness of this cigar can be attributed to its very old fillers, binder and wrapper. Packed with complex flavors and aromas, the “R.E.” has achieved great recognition among the elite of cigar connoisseurs. An exceptional cigar from 10 year old tobaccos. After many years of research and testing, the PG Maduro evolved into a very complex flavorful cigar with excellent construction, a very easy draw and extra smooth characteristics. According to many it is without any doubt, “the finest Maduro ever.” The Maduro’s delicious flavors coupled with subtle aromas create a complex taste that lingers on the palate with a hint of cocoa and mocha. Introduced in 1997, the Artisan’s Selection is an expertly constructed mild to medium bodied cigar with a complex filler blend and a colorado Ecuadorian grown Connecticut seed wrapper. Artisan’s have established a great reputation for their consistency and smoothness.

A great cigar at an affordable price. The name ‘Artisan’ honors the craftmanship of the skilled rollers at Tobaccos Dominicanos. 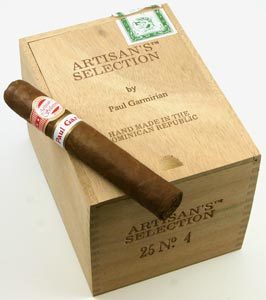 A UNIQUE BLEND WITH AN EXCEPTIONALLY DARK & OILY WRAPPER

Celebrating 25 years (1990-2015) 25,000 Connoisseur were made in 2015 packed in 1250 boxes. The cigar transitions effortlessly, many have called it, “A Masterpiece” A beautiful dark and oily Oscuro Maduro wrapper, four complex fillers and a Dominican barrel aged binder produce a rich, complex and balanced smoke that is sure to impress the most discriminating aficionados. The strength is medium to full body, but full in flavor. 150 boxes of Short Robusto were released in November 2016. A UNIQUE BLEND WITH AN EXCEPTIONALLY DARK & OILY WRAPPER

Covered with the greatest wrapper we have ever seen (dark, oily, and smooth) it is combined with four complex fillers and a Havana seed binder. The 20th Anniversary has achieved a height of rich elegance and taste hitherto unknown outside of Cuba – far exceeding our expectations. Henky Kelner and Eladio Diaz have honored us yet again with this incredible blend.

Officially, the Symphony 20 Connoisseur was released in 2010. An intriguing, full bodied, rich and smooth cigar, filler tobaccos used in the 15th Anniversary line are grown in the original farms used to make the first PG’s in 1990. The Colorado Nicaraguan wrapper is dark and oily and enhances the flavors of the cigar to make the tobaccos (which have been aged for 5 years) smooth and delicious.

For the relatively new smoker, it represents a kaleidoscopic range of tastes. For the seasoned smoker it is reminiscent of old style Cuban Puros from the mid 1950’s. A full bodied cigar with an exquisite aroma, subtle spice and smooth finish. Reminiscent of the great Cuban cigars PG enjoyed in the 1950s and early 1960s. The Soiree; French for ‘evening get together,’ is rich and tantalizing and the perfect way to complete a relaxing evening. With nuanced strength, it will fool you if you don’t pay attention to it. Introduced in 2011, the PG Artisan’s Passion is full flavor and affordably priced. Smooth, but full bodied with a great bouquet. Rich and slow burning cigar with a dark and oily wrapper. Dominican Puro – Made entirely with Dominican grown tobaccos. 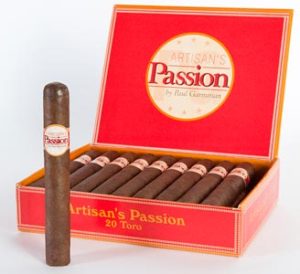